The Fair Work Ombudsman was unable to resolve my unpaid wages issue – What are my next steps? 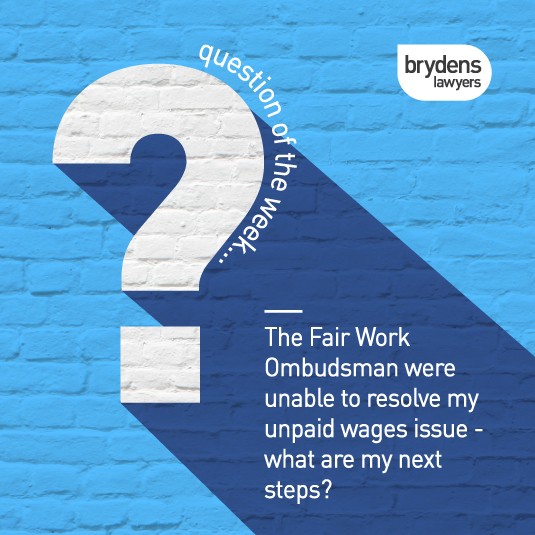 The Fair Work Ombudsman was unable to resolve my unpaid wages issue – What are my next steps?

If the Fair Work Ombudsman is unable to resolve your claim for underpayment of wages, you may consider making a claim through the court system. The Federal Circuit Court of Australia and the Local Court of New South Wales both contain Small Claims Divisions to assist those to recover money that is owed. This includes but is not limited to entitlements owed under a contract of employment or an award as well as wages.

If the amount owed and sought is more than $10,000 under a contract of employment or more than $20,000 pursuant to an award or under the Fair Work Act, legal proceedings can be brought for what is owed but not through the Small Claims Division. Rather, the claim would have to be prosecuted through the Federal Circuit Court or the Federal Court of Australia or in the General Division of the Local Court of New South Wales or indeed, in the District or Supreme Court depending on the amount involved.

Brydens Lawyers have experts available to assist you in the recovery of all and any entitlements or wages due pursuant to a contract of employment or under an award. Strict time limits may apply so contact Brydens Lawyers without delay on 1800 848 848 or at brydens.com.au. At Brydens Lawyers – #WE DO claims for unpaid wages and entitlements.