Question of the week- Friday 12th March – What benefits/expenses are able to be claimed by injured workers? 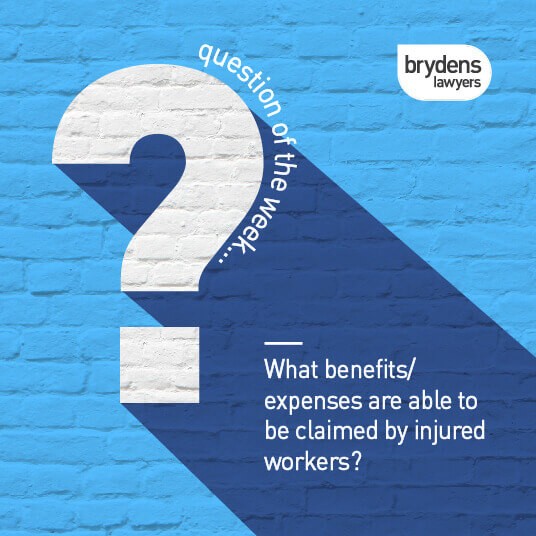 Generally speaking, an injured worker is entitled to claim as follows:

Whilst absent from their employment an injured worker is entitled to receive weekly benefits of compensation (wages) for the period of absence. For the initial 13 weeks after a claim is made the injured worker will receive 95% of their pre-injury average weekly earnings. Things thereafter can get a little complicated.

Whether the injured worker will continue to receive weekly benefits after 130 weeks from the date on which the claim was made will depend on whether the worker has any capacity for work. After 130 weeks, if a worker has returned to work for at least 15 hours per week and is also earning $200 per week, that worker can receive make up pay for a further period of 130 weeks. If however the worker is totally unfit for work after the first 130 weeks period expires and the insurer agrees that there is unlikely to be any significant improvement in the worker’s condition, then weekly benefits can be paid to the injured worker for a further 130 week period.

If a worker has been found to have over 20% whole person impairment by reason of their injuries, then they will be entitled to continuation of weekly benefits of compensation until reaching retirement age.

As to lump sum compensation an injured worker is entitled to receive such benefits if the injury which they have sustained results in a whole person impairment in excess of 10%. This can be determined by way of agreement with the insurer or alternatively, by way of a binding assessment with an Approved Medical Specialist. The payment of such lump sum compensation is completely separate and distinct from the weekly benefits of compensation referred to above.

In addition, the injured worker is entitled to receive reimbursement and/or payment of all reasonable and necessary treatment, rehabilitation, medical, hospital and other expenses. Again, if there is a dispute with the insurer as to the payment of these expenses then same can be resolved by way of an application to the Personals Injury Commission.

In the event that the injury results in the death of the worker then there are death benefits available to family members and dependants.

It should also be noted that there are special provisions under the workers compensation scheme for payment of benefits to a particular class of workers. This includes police officers, paramedics, firefighters, bush firefighters and emergency service volunteers and people who suffer as a result of a dust disease (e.g. asbestos).