Question of the week – Friday 26th March – Defamation: How do I know if I have a viable claim? 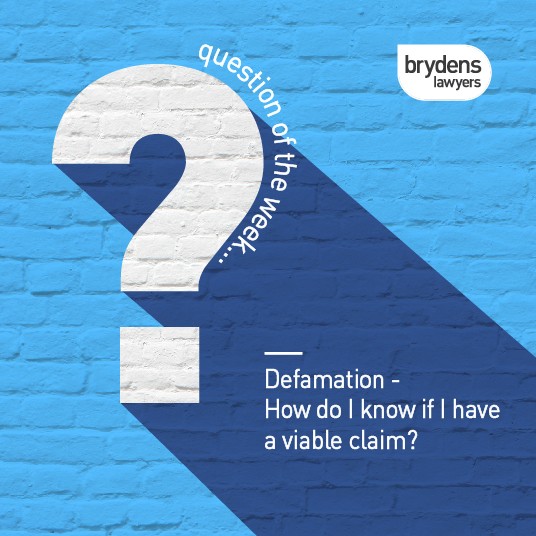 Defamation- How do I know if I have a viable claim?

It has been well publicised that the Commonwealth Attorney General is suing the ABC in defamation. It follows the publication by the ABC of an article written by Louise Milligan entitled, “Scott Morrison, Senators and AFP told of historical rape allegation against cabinet minister”.

In New South Wales, the law of defamation is governed by the Defamation Act 2005. It sets out the legislative framework for the prosecuting of a defamation action.

Simply put defamation is an action brought by a person or a business against another for publishing defamatory material. To succeed in such an action, it is necessary to prove, ultimately to the satisfaction of a jury and a court:

1. That there was the publication of the offending material. Publication can be either oral or in writing.

2. That the published material was considered to be defamatory by the ordinary person.

3. That the plaintiff being the person suing can be readily identified from the material published.

4. That there is no lawful defence or legal excuse to the publication of the defamatory material.

The propensity to sue for defamation has significantly increased with the rise in popularity of social media. It is well-established that the publication of any defamatory material can make the publisher liable in defamation to any party defamed. Additionally, it should be noted that the re-posting or re-tweeting of any defamatory material may also make those who re-post or re-tweet liable.

A defamation claim can be brought as against an individual who has published defamatory material. It can also be brought against large media organisations such as newspapers or television stations. Even government authorities can be sued for defamation.

In the event that the defamation claim is successful then the injured party is entitled to recover damages. The damages awarded by the court are compensatory, that is, designed to restore the injured person to the position they would have been in had there been no publication. The injured party can sue to recover any economic loss and non-economic loss (pain and suffering type damages). There are a number of defences available to the party being sued in defamation. One such defence includes “honest opinion”. That is, if the publication is of an opinion held by the publisher and based on proper material, then this will serve as a defence to an action in defamation.

There is only one year from the date of publication of the defamatory material in which to sue for defamation. Accordingly, time is of the essence.