Does the Workers Compensation Act account for workplace bullying or harassment? 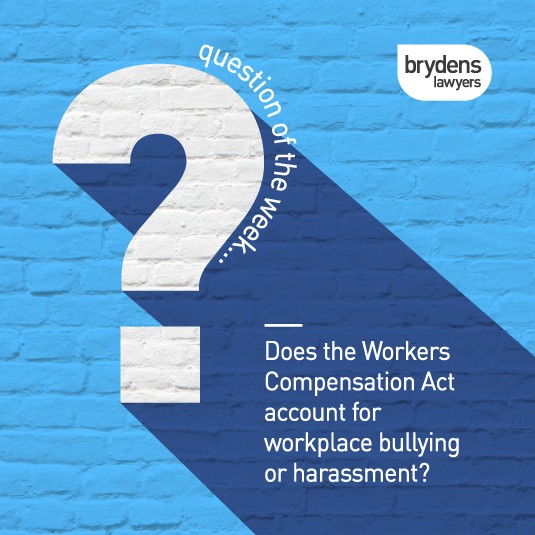 Does the Workers Compensation Act account for workplace bullying or harassment?

The Workers Compensation Act 1987 provides compensation for injuries sustained by a worker which includes injuries arising out of workplace bullying and harassment.

Such conduct can readily result in a worker suffering a psychological or psychiatric injury and this would attract the same benefits for the worker as if they had suffered a physical injury.

Firstly, the injured worker would be entitled to be paid weekly compensation of benefits for periods of incapacity for work. The insurer would also have to pay the reasonable medical treatment expenses incurred.

There is also lump sum compensation that can be claimed for a psychological injury if the worker can establish that the injury has resulted in a whole person impairment of at least 15%. For reasons best known to the legislators who drafted the amendments to the Workers Compensation Act, the 15% threshold is imposed on workers who suffer a psychological or psychiatric injury as opposed to the 10% threshold which applies to a physical injury. There is of course absolutely no logical explanation for such a discrepancy.

The legislation provides that in order to claim compensation it is necessary to establish that the employment was a substantial if not the main contributing factor to the development of the psychological injury. Also, note Section 11 A which provides that if the psychological injury was wholly caused by the reasonable actions on behalf of the employer in respect of retrenchment, discipline, performance appraisal or other valid management procedures, then compensation is not available.